Everybody who has done a few series at Snapshot Hoge Veluwe, must have seen them. Series of pictures without wildlife. We can only see some waving trees and grasses. Normally these empty shots are not so common when classifying images. But recently these empty series have been occurring more often. We are happy to explain you why. 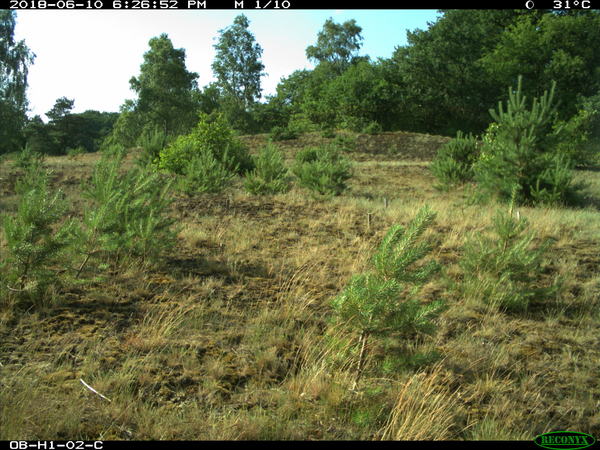 The cameras in the Park take a series of pictures when the built-in heat sensor discovers a change in temperature. Animals normally radiate more heat than their environment, so they trigger the camera when they pass the sensor. In winter, the temperature difference between the animals and the environment is higher than in summer. So in winter wildlife also triggers the camera from a larger distance.

When the weather is hot, trees, shrubs and grass will also be warmer. With a lot of sun, the trees can even get a higher temperature than the environment. When they move, there is a change of temperature, which will trigger the camera to take pictures. Even a breeze can cause a temperature difference. In the Netherlands, this spring and summer were abnormally warm. The pictures currently available on Snapshot were taken during these hot months. That is why a lot of empty shots are now present on Snapshot Hoge Veluwe.

We understand that you are not on Snapshot to look at empty pictures. We are working on removing the empty series from Snapshot so you can spot more wildlife. It will help us if you tag these empty pictures with #empty (or #leeg in Dutch).

Fortunately, there are loads of other pictures on Snapshot. The latest upload contains pictures taken in August, September and October 2017. The rut period of red deer! Who has already seen the territorial behavior of the red deer on the pictures?