Since 2013, Wageningen University has been using camera traps to study wildlife behaviour at De Hoge Veluwe National Park. Early on in the project, it became apparent that it would be impossible for the small team of researchers and volunteers involved to manually assess the enormous number of photos the cameras were taking – more than 1 million each year. It was then decided to call in the help of any and all nature lovers interested in lending a helping hand. 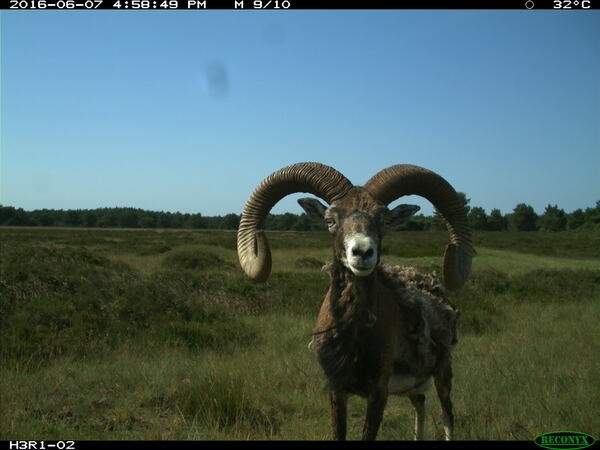 On 29 May 2018, De Hoge Veluwe National Park and Wageningen University launched the Snapshot Hoge Veluwe project. Initially, the photos could only be viewed through the Park’s website, but a year later the project found a home on Zooniverse, the world’s largest and most popular citizen science platform. De Hoge Veluwe National Park was the first European national park to be featured on Zooniverse.
Over the past few years, more than 15,000 registered (and tens of thousands of unregistered) citizen scientists from all over the world (including the United States, South Africa and Germany) have reviewed the more than 3.5 million images recorded by Snapshot’s camera traps. Together, they have made an essential contribution to our understanding of the behaviour of the Park’s large ungulates.

Many insights thanks to Snapshot
Thanks to Snapshot Hoge Veluwe, we now have more insight into the preferences different species have when it comes to their habitats and foraging areas, and how these preferences sometimes change with the seasons. The project has also revealed how wildlife responds to human activity, for instance after certain areas of the Park were closed to visitors, or during the Covid lockdowns. Without the hard work and dedication of the enormous number of volunteers who contributed to the project, and who together assessed over 3.5 million images over the past few years, we would not have had these new insights into animal behaviour.

Machine learning
Computer experts have developed an algorithm for Agouti (the project’s computer system) that can take over a good deal of the assessment work. By feeding the algorithm a large data set comprised of images that had already been reviewed by volunteers, it is now able to accurately assess new images. This process is called machine learning – a form of artificial intelligence. The algorithm now recognizes the Park’s most common species, such as red deer, roe deer, wild boars and mouflons.

Going forward, the photos being taken by Snapshot’s 50 to 70 camera traps will no longer be uploaded to Snapshot Hoge Veluwe’s Agouti environment. By continuing to develop the system’s data processing, artificial intelligence will be able to produce insights into more aspects of wildlife behaviour, such as group size.
This means that, while the animal behaviour research at De Hoge Veluwe National Park will of course continue, the Snapshot Hoge Veluwe website will soon be taken offline. The project will no longer be available on Zooniverse either.

Many thanks to all our volunteers!

De Hoge Veluwe National Park is very grateful to all the volunteers who contributed to Snapshot Hoge Veluwe in recent years. Without them, this citizen science project would never have been such a resounding success. We appreciate that many of our volunteers will miss being part of the project, but it is thanks to their efforts that computers will now be able to take over the brunt of the work.